NOTE I was unable to complete the challenge ahead of the 18th of July deadline due to other commitments, what follows is a write up of my progress in the challenge after ~6hrs total spent.

On watching the video noted 299879 as the evidence id on the bag, this may be relevant later.

Yields nca_image.bin, let’s use binwalk to analyse the file

On using binwalk -e everything except the identified QCOW image is extracted, so using my helper script

We manually carve the file out

Ultimately this appears to be a false identification, opening up the file in bless noted many occurences of the QFI header associated with a qcow image, and errors such as

Variant on the version of qemu being run, means I move onto analysing the rest of the extracted files.

Opening the file (which I did on a tails VM to err on the side of caution, citing paranoia over potential for some macros), notes what appears to be a raw email complete with headers.

So I unzip the .dox file and again use binwalk to inspect the file.

binwalk has provided us with information showing this is an encrypted archive containing thress files, so its needed to extract the zip file and break the encryption to get at the files within.

So now we have three files.

I setup John to start brute forcing the gpg key password whilst inspecting the other files; think of it as an efficent workflow we may not need the bruteforce however there’s no harm in having it run whilst we continue the investigation

Listening to the wav file in vlc this is clearly DTMF tones and a modem handshake, using multimon I can extract the numbers associated with the DTMF tones.

On this first pass there is some odd behaviour occuring, some numbers are being repeated and some appear to be being skipped, opening the wav file in audacity reveals the issue. 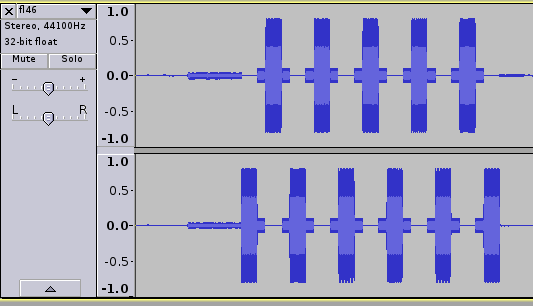 The wave file is stereo meaning there is both a left and right channel, observing the pattern above it’s clear this is an 11 didgit telephone number, we “flatten” the file to mono and run it through multimon again

Calling the number (via an anonymized service of course) yeilds a very faint voice reading numbers aloud, this is why having the call recording prior to dialing is such an advantage; some post processing to raise the volume and carefull listening yields: 533020565

2 slide presentation First slide “It is not the strongest of the species that survives, but the more adaptable”, background portrait of Charles darwin, oleEmbbeded file “TransferCode.zip.001” could infer multipart zip

running binalk -e produxes the .zip and the .pdf file, the .pdf file is unreadable as it is incomplete therefor we know that this zip file is the head of a multipart archive.

Unfortunatly this is where I must end, I originally did the above work on June 30th 2015 in my evening, and was not able to pick it up again untill autoring this blog post … past the deadline, the PDF file appears to be the final stage. (Just cat the zip files togetheer and unzip to get the PDF file)

Oh well it was an interesting puzzle at least and a welcomed exercise of skills I do not nearly get to use enough.