I’m currently in the process of overhauling my pesonal work network, this includes deployment of an inline IPS as part of the project.

You can of course change the OS on the Utlite pro to things such as Kali and Arch assault the caveat being if you want to install on the mSATA and not run from the sdcard you’re going to need to use the serial connection.

My USB -> Serial adapter has a male connector, the connector for the Utilite also provides a male DB9 connection … so an adapter is on order.

So as can be seen here I’m sitting the device inline, with the intent to have it route traffic between the LAN and WAN, as an asside I also plan to use the WiFi to provide Wireless access disbaling the ISP equipment, also to allow segmented guest access for visitors etc / captive portal, but that’s a far off from solid plan at the moment

The packages available from the ubuntu arm repos are 1.x and I want the new 2.x builds (Archassault however took my feedback and have built the 2.x packages) so in the interim to receiving the required equipment to install Arch on arm all the prototyping will need to use the unbuntu install.

Adapting from the intructions here.

I want everything to run on the sdcard at this time as I plan to replace the OS and thus everything on the mSATA ;-)

After complete of the above your build info should look like

You can now run Surticata in IDS mode:

NOTE The intention is to run in IPS mode, however IDS is suitable to complete the integration with logstash and kibana

Get some event data

Configure your SSHD for keyonly authentication, and harden to your preferences and then just expose SSH to the internet for a few hours; I’m not kidding here within ~12 hours I’d logged well over 1K attempted logins enough for suricata to log some ET COMPROMISED Known Compromised or Hostile Host Traffic group events.

This will take some time to start up, note that if you want to load in an existing log set, add start_position => "beginning" to the file {} declaration before starting logstash, after the back loading has completed I recomend you to remove this line, as it defaults to “end” and logstash tracks it’s position in the file if you leave this as beginning however it will always start at the beginning of the log and take a long time to startup needlessly

something screwy occurs within jruby

Select 1 or whatever index you are shown

Kibana is really just a web interface, so download it and install your preffered webserver to run it from nGinx / Apache / Lighthttpd etc …

In your browser now go to https://your_device/path/to/kibana/#/dashboard/file/suricata2.json 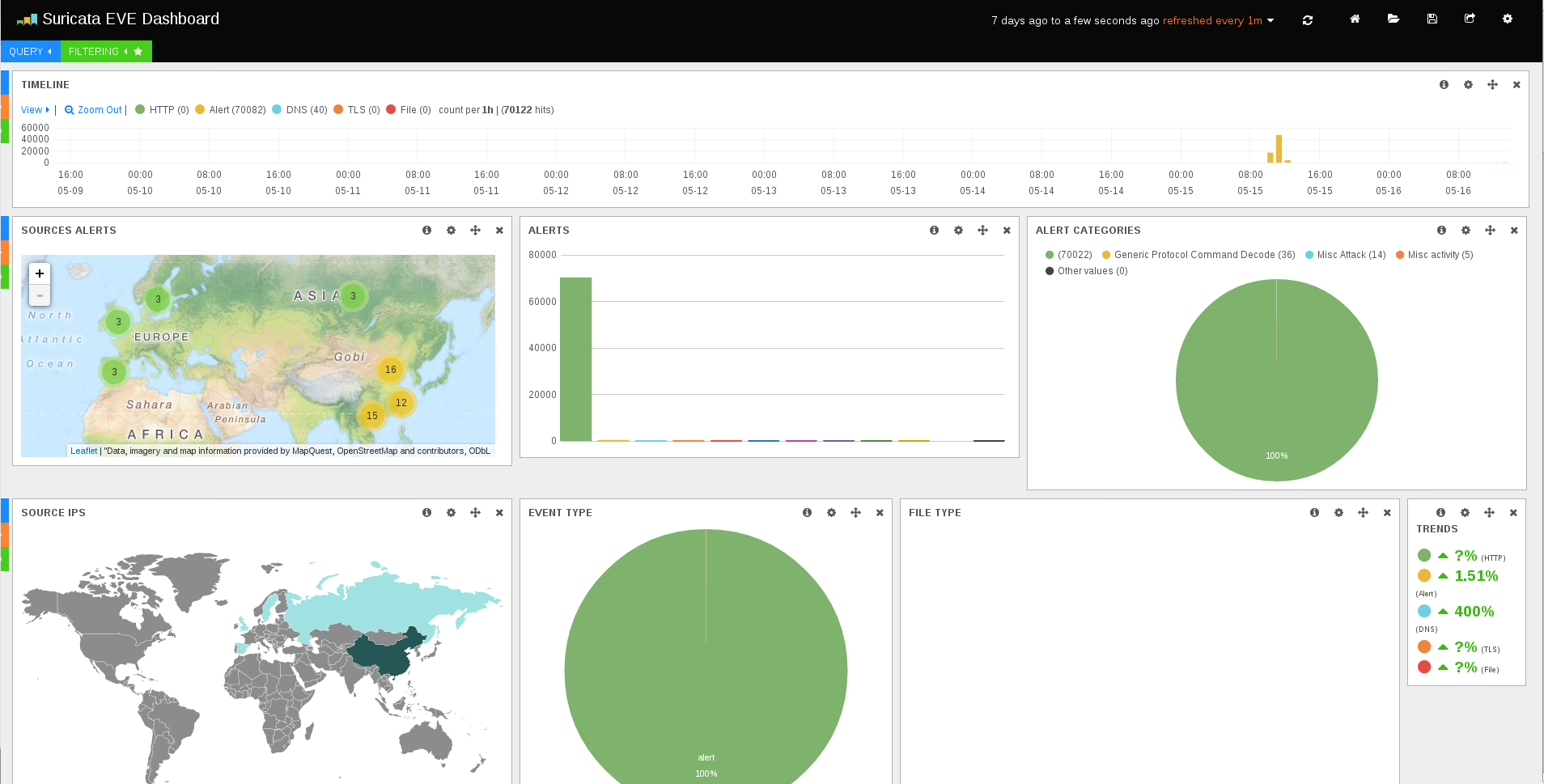